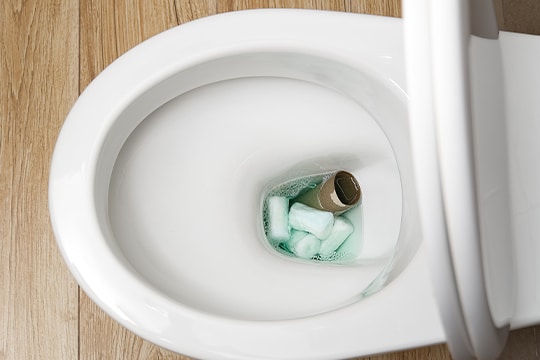 Will A Blocked Toilet Sort Itself?

Do you require 24/7 drain care in Crook area? As with any blocked drain or sewer it’s never pleasant to have to deal with. When it comes to a toilet in your house or workplace not flushing properly, leaving waste behind for a period of time it’s just another thing that has been added to your list to deal with. Often you may find that the water levels rise when you flush and this can be the start of a blocked toilet or possibly your sewer.

If the situation was extreme, which sometimes it does happen, the blockages can cause the outdoor external sewers to overflow and sometimes you will find that fluids and waste will come up through other sinks and drains in your property. These are all critical signs of a blocked toilet that need to be resolved. However, often people think a blocked toilet will solve itself…

Can a toilet unblock itself?

A standard blockage that is caused by incorrect items or too much toilet paper being flushed sometimes unblock itself… eventually! It is wise to bear in mind that the problem can continue if they are not jetted. The blockage may seem to have passed but it is likely that if it is not professionally removed that it has only been pushed further down the drain.

At some point we have all most likely flushed something down the toilet that we shouldn’t have done, so here are a list of items that should be disposed of separately.

The reason for not flushing any of the above is that they are no degradable. If you flush them, you’re likely to end up with blocked drains or a toilet. Not only do these items not break down when flushed but if everyone in your village or street flushed one of these items they are all going to reach the main sewer and an even bigger blockage.

Does flushing too much toilet paper cause a blockage?

The simple answer is yes. It may be safe to flush, hence we use it but too much can be the reason you find yourself with a blocked toilet. Toilet paper does degrade and breakdown, but this isn’t an instant action, it takes time. Children can often put far too much toilet paper down the toilet without thinking and the only way to free up your drains is with drain jetting or drain unblocking services.

It’s always best to speak with your local drainage team when you notice a blockage as it may be worse than you think and something that needs sorting sooner rather than later.

By simply just jetting your pipes or having a CCTV Survey carried out will help to identify where the problem is, what’s causing the blockage and then once it had been resolved you won’t have to worry about it again!

Our drain jetting services are available all across the North East and Leeds. This process has been designed to clean clogged and backed up sewers. The procedure will allow the user to clean and remove the dirt that has accumulated in the pipes without having to put your hands in anywhere dirty. Nobody would like to put their hand down a drain and experience the awful smelling sewer. Contact our team to take care of the problem for you!

The Rapid Response Drain Care team provide a number of services including Drain Unblocking, CCTV Drain Surveys, Drain Jetting, Jet Vac, Sewer Repairs and more. For 24/7 drain care in Crook and across the North East, call us on 01429 883 956 for more information or to book one of our services.